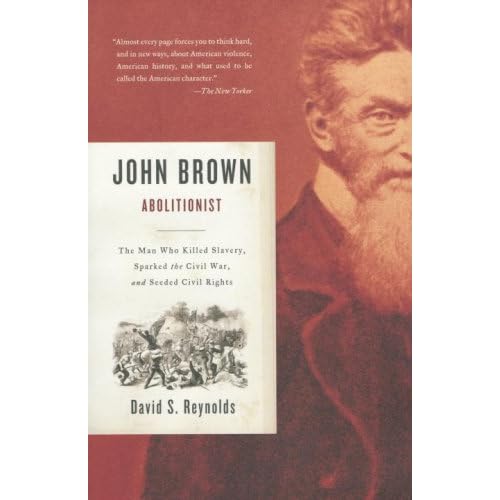 I have started a new nighttime book. I have two books being read at any time, one is serious and usually boring, Zizek’s In Defense of Lost Causes, and then the nighttime book is more fluff. For a long time I have been interested in John Brown and my curiosity has been piqued by its predominance in the new Zizek book. So here I am with John Brown, Abolitionist by David S. Reynolds.

The first nineteen pages are about Brown’s ancestors and a brief (so far it is brief, but still engaged) sketch of Puritanism and abolitionist development. So far the book follows Reynolds’ method of inquiry, but on page 19 he reaches the question of inquiry: “How could Puritanism fuse with antislavery passion with such intensity in John Brown that he believed he could single-handedly free America’s 4 million slaves?’ (19). This is a disappointing question. Has Reynolds forgotten his own discussion about Puritanism?

Puritanism is less about making the world better, although they do strive for it, but more about a complete devotion to an ideal. It is akin to Kant’s categorical imperative, less about the end and more about how to be devoted to the end. (Zizek 2008, 225) If John Brown had been asked this question, I am willing to put money that he was and that the answer is recorded somewhere, I predict his answer would have been quick, short and unwavering: “You tell the one slave I did free that it was all for naught because slavery still exists.”

For another example of this lack of analysis we can look back to page 7.

Although after the raid he was first denounced by most Northerners, a few influential individuals, especially the Transcendentalists, salvaged his reputation by placing him on the level of Christ – a notable misreading of a man who, despite his remarkable virtues, had violent excesses [emphasis mine], as evidenced by the nighttime slaughter of five proslavery residents he had directed in Pottawatomie, Kansas.

I have no problem with Reynolds making a normative assessment of the slaughter, but to call it an excess requires more work. I do hold out the possibility that the work is done later and this reference is merely a foreshadow (page 7, after all), but until I come across that effort I will launch the following criticism. Where is the line demarcating acceptable and unacceptable violence against the slavery advocates? Why should we even care about Reynolds’ theory: Brown believed in a rigorous system of retribution. Were his actions even consistent within his own framework? Or were his actions akin to a violent G8 protest, often conducted by young people merely looking to break stuff.

The book is already predicated upon a belief in comparing alternatives rather than a faith. This cynicism of Reynolds makes me uncomfortable as I wonder about his ability to relate Brown’s thoughts anywhere close to accurately if he cannot even grasp that questions of efficacy were irrelevant to Brown when the matter was one of absolute right and wrong.

Despite this, I find the book engaging and well written. There is more here than I had expected and I am excited to see what else Reynolds will educate me about that I was not expecting.