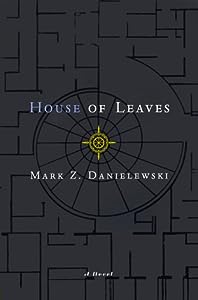 Cover of House of Leaves

Nate suggested a while ago that I do what Nick Hornby does, or at least did, and each month compose a column listing books bought and books read and then some nonsense hopefully related and uniting the contents of the lists.  Hornby even published two books, albeit they are both small books, of these columns and I find the essays to be meandering and rarely about the lists.  In any case, this post will be a third of the task: a list of books bought.

I am currently in Ann Arbor for the usual summer gig and there is a store here which is my favorite book store of all the places across the US.  Some of you know about my obsession with Verso Books.  They publish high quality scholarship and their books have a certain aesthetic to them that I cannot avoid.  But it’s hard to find their books because they are exactly what the American book consumer is not purchasing.  Shaman Drum Bookstore is easily the best place I have found to find portions of the Verso catalogue.  My job finally settled enough to-day for me to venture out there and they are closing.  All books are half off so I had to indulge some.  As much as Chase and Wells Fargo would allow me to indulge, anyways.

Brooks, Daphne A.  (2007).  Grace. NY: Continuum.  This is part of 33 1/3 series where each ook is about an influential album.  This book is about Jeff Buckley’s Grace album.  It’s an enjoyable enough album, I thought I was going to enjoy it more.  The main track on it is a cover of Leonard Cohen’s “Hallelujah”.  You know it.  It is that one song on West Wing when CJ Craig’s bodyguard (Mark Harmon) is killed.  Oh yeah, THAT song.  I still shiver when I hear it.  In any case the book was $5 so I picked it up.  I do enjoy reading about music.  The book about punk rock Ursa introduced me to, Please Kill Me (I think) and Bang Your Head are easily some of my favorite reads ever.

Hampton, Howard.  (2007).  Born in Flames: Termite dreams, dialectical fairy tales, and pop apocalypses. Cambridge:  Harvard Press.  A subtitle like that how can I not buy it?  Plus the cover is gorgeous.  It talks some about my favorite book of criticism (one of my favorite books) of all time Lester Bang’s Psychotic Reactions and Carbeurator Dung.

Now for the Verso Books, all published in London.

Sarlo, Beatriz.  (1993).  Jorge Luis Borges: A writer on the edge. I have read zero Borges.  I continually come across refrences to him so he always make my list of books to read.  It’s a Verso book.  It’s about art.  It’s about avant-garde writing.  Borges is listed as the main reference for what is my favorite book of all time, Mark Z. Danielewski’s House of Leaves and that makes Borges worth investigation.  Plus, It’s a Verso book that was half price.

Elbaum, Mark.  (2002).  Revolution in the air: Sixties radicals turn to Lenin, Mao and Che. An interesting subtitle.  A Verso book.  It promises to fill in a certain gap in what I know about, radical formation in the US and its turn to Marxist analysis.  The Swede sent me a text yesterday that she ran into a bike mob in Minneapolis and the cops looked tired, hot, and pissed.  Critical Mass.  Fuck I love the radical community in Minneapolis.

Sturrock, John.  (1998).  The word from Paris: Essays on modern French thinkers and writers. French thinkers: Althusser, Lacan, Derrida and Foucault are just the most exciting of the ones in here.  And that is just Part I.  Part II is about writers, which looking over the names and resumes of the names I take Sturrock means fiction writers.  I am always on the look for short essays about some of these folk to serve as a memory jogger, a little refresher course to lift some of the cobwebs.

There we have the list of books bought to-day.  I was working on 100 year sof Solitude by GGM.  For days I have been fighting the temptation to put it down, only to hang on based on the prestige GGM has as a writer.  I doubt I will have the fortitude to not put it down to-morrow though.  After all I will be rooting for the USA to beat the Brazilian team and that struggle probably mirrors, in some odd way, the struggle I will take on as I defend GGM as not one of the 20th centuries best writers.  In my mind there is some parallel.

On another tangential note, I am doing a good job of aping Hornby’s articles, The Swede did make the NorthStar Roller Girls for next season.  That is very exciting.  I am happy for her.  You should be too.