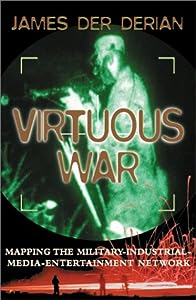 No sooner have I written the previous post than I begin chapter two of Chaloupka’s Kowing Nukes. Here is his argument:

…the warrior is now simply and starkly absent.  For several reasons (technological, political, and theoretical), the warrior has ceased to hold any kind of posibility.  Instances where the warrior seems to be present – Panama, Liberia, Grenada, Afghanistan, even the Persian Gulf – quickly present themselves as failures, spectacles, or exercises in nostalgia. (24)

It is precisely the absence of the warrior, also read as the increasing sociality of our civilization, that gives rise to so much literature about warriors.  Some may respond to Chaloupka that 9/11 returned us to a world that had ceased when he wrote the above words in 1992.  However, the remainder of the book pre-empts this argument by claiming nuclear weapons are an example fo the shift away from warriors and that our current world has not seen such a large revision to return us to the simpler times.  Der Derian’s Virtuous War (2001) is a better accounting of this shift than Chaloupka provides, but that is also easily acocunted for by the intended market for the two books.

The crux of my thought for now is that the Western and the espionage thriller are a romantic’s response to the increasing alienation we feel in our world.  I believe this alienation is inevitable and defines the human condition, but some reach out to a past time as a way to bridge the human gap.  Strip away the grocery stores and the deeply troubling give and takes of a long term healthy relationship and the writer is left with a solitary figure marked on the desolate horizon.  It’s the simple protagonist conflicted against a simple environment that best analogically allows the writer to conquer the true foe.