I had started this book once before, or so I guess from the marginalia in the 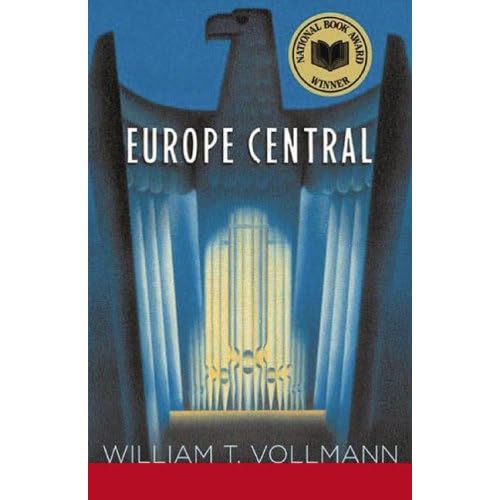 first few pages.  I have no recollection.  I can tell from the first few pages that it is a heady tome and probably untenable as a piece to juggle during the school year when I am busy with serious research.  But it is the summertime, after all, and this comes close to Beach Fare for me.

I have never been shy about my man-crush on William T Vollmann.  It won the National Book Award, one of the few awards that has yet to let me down.  And.  And it is about the eastern front during WWII.  Not that that is intrinsically attractive to me, but given Vollmann I bet it is a fascinating look at violence and political theory and heavy yet captivating characterizations.

One thing that has caught my attention already is how Vollmann refers to Nazi Germany: sleepwalker.  Not capitalized.  Not unique or a proper name.  But as an adjective, a predicate noun to be more precise.  How interesting.  What is it about somnambulation that makes the Third Reich worthy?  My guess is that Vollmann is getting at a type of zombie-like state.  The person is just a body.  Unthinking.  Unfeeling.  There are libidinal desires but without the mind the body thrashes about and tries to satisfy the desires without finesse, which is simply violence.  Violence is the easy way to strike out at what is wanted.  No persuasion.  No trickery.  No sophistry.

Ursa was the first to connect this to zombies for me.  What if the zombie is best like somnambulation and less like the un-dead?  Then the cure is to wake up the body.  This metaphor makes a lot more sense in a political context, as it caters to the great Western liberal myth of consciousness raising as the answer to problems.  I suspect, however, that Vollmann will not fall for this.  Sure you can wake up most people but the zombie is different, it does respond to wants whereas the sleeping person does not.  In the end Ursa may be right for the state of the person-as-zombie but it makes the cure even more problematic.

Was the answer to tell the German population about the horrors of Auschwitz?  There is debate but I will say no.  They knew what was going on.  The response is that they did not know the degree and I call bullshit.  Maybe the degree exceeded what they thought was going on, but what was known would have been/should have been enough to shock them into resistance if there was a threshold to such barbarity.  This argument is also too forgiving, not only to them but to us.  It too easily allows us to assimilate the horrors as some unique act allowing us to look the other way.

Even though the status quo horrors may pale in comparison, a claim I am willing to interrogate, they are still horrible enough to compel action.  People know it.  It is not a matter of consciousness raising.  The resistor needs to en-courage, not educate.  The resistor needs to show that it is possible to look straight on and not away.  The resistor needs to risk.  Even in, especially in, the face of futility.  None of this is new or even erudite, which is exactly the point.  We need to stop looking for creative solutions and instead choose bold actions.

This is what I keep coming back to as the health care debate is beginning to dominate the news.  The tinkerings only make me more upset.  Remove health care from employment status.  It’s a rigged game and time for us to make a stand that helath care ought to be a positive right.  Is a public run system less efficient?  Probably.  I am willing to concede that.  But I will then challenge vociferously the validity of efficiency as the mark of success.  Of course there will be lines as more people seek preventive care.  That is not necessarily the mark of inefficiency, rather that is the mark of privilege protecting their privilege.  Waiting in qeues cuts into time they could be on the phone or sitting in a Dairy Queen drive through ordering a Blizzard.

One thought on “Vollmann’s Europe Central”